Different kinds and styles of piano demand different handling and equipment. Hence, how much does it cost to move a piano varies. Heavier pianos require more people and supplies. Naturally, they cost more to move. The shape variation between an upright piano and a grand piano can also create differences in pricing. That happens as the amount of padding required varies. Furthermore, costs add up when more moving blankets, more employees, and larger crating materials are used.

Heavier and larger pianos cost more when being moved between Point A and Point B. That is simply because they will require more movers in Tampa along with specialized equipment, more wrapping materials and even partial disassembly for safe transportation.

The cost to move a grand piano: Grand pianos have a very distinguishable shape and can weigh anywhere from 600 pounds up to 1,200 pounds. Moving a grand piano will cost you much more than the average $240 due to its huge dimensions and its unique shape. The latter makes it very tough to makeover around the premises on its way to the moving vehicle.

Moving A Spinet Piano: Spinet pianos are the smallest upright pianos available and they weigh around 300-400 pounds. Tampa piano movers charge anywhere between $150 and $500 depending on the distance over which the spinet piano has to be moved.

Moving A Large Piano Locally: Large upright pianos can weigh anywhere from 500 pounds to 800 pounds. Their local move costs vary from $150 to $300. 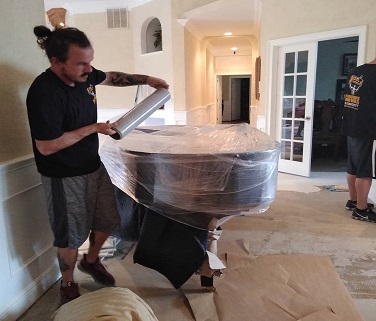 It helps when you consult professionals regarding the best way to move a piano. They might use a variety of special equipment to do the job safely. Examples include a large dolly, boards or slings, furniture straps, skids, straps, moving pads, etc. Such equipment isn’t the standard fare you’ll find at the hardware store. So, they may increase the overall average cost to move a piano.

For example, a rolling board designed to hold a grand piano can cost upwards of $700. Additionally, the moving company will have to use heavy padding to cushion the piano while it is in transit. They would also need special wrapping for the keyboard to prevent damage to the keys. In several cases, portions of the piano may need to be disassembled to get it around corners and out the door. Trained packing and moving professionals know exactly how to take the piano apart and put it back together again, without damaging the components. 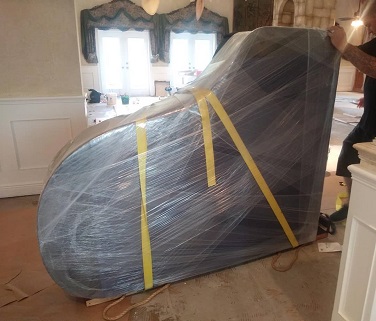 When you discuss such situations in advance, it becomes easier to maintain accurate estimates and clarity at every step of the piano moving process.

Tipping is customary for piano movers. So, when you want to know how much does it cost to move a piano, you should include the average tipping amount for a better idea. It is usually $20 to $40 per mover, depending on the complexity of the job.

In case of the improbable, you’ll want to insure your instrument during the move. Moving companies should include up to $5,000 in insurance at no additional cost. If the instrument is worth more than that, you can expect to pay up to $20 more in insurance per addition of $1,000 in value.

The simplest way to move a piano, as well as the most cost-effective one, is in a continuous path from A to Z, with no obstacles in between. But, that situation almost never happens. Pianos are in rooms, within all kinds of buildings. Many times, they must go down hallways and turn corners into other hallways, etc. All those tricky places add to the cost of moving a piano. Similarly, pianos sometimes must go down or upstairs, or come out of storage units. Each obstacle raises the price. Hence, when you ask, “How much does it cost to move a piano locally?”, your average should include the above considerations.

A Guide to Storing a Piano Properly

6 Practical Moving Tips You Can Use to Avoid Stress

What are Some Pro Tips for Moving Heavy Furniture